For some reason this is pronounced as the Chumley Triathlon. Only my second tri since September 2019. As for most triathletes, I had done hardly any swimming for over a year so it was into the unknown to a certain extent.

As a Castle series there are events all day long on Saturday and Sunday. The Olympic triathlon first wave commenced at a very civilised time of 10.00 am so we were able to have our breakfast at the B&B, albeit I had to pass on the egg, beans, mushroom, hash browns and bacon. Scrambled eggs on toast was a departure from my usual porridge pre-race breakfast.

Registration was scheduled by wave so as to keep everyone safe, and was very efficient. We did meet a young lad in the car park (of course everyone seems like a young lad to me) who asked us if he should put his wetsuit on there instead of in transition as he’d never done a tri previously. He went on to say that he’d never swum in open water but he’d swum well in the pool. I’d heard that somewhere before when it was closely followed by a nightmare 1,500m. We tried to give him a few tips without alarming him unduly. Unfortunately, we didn’t get his name so have no idea how it went. 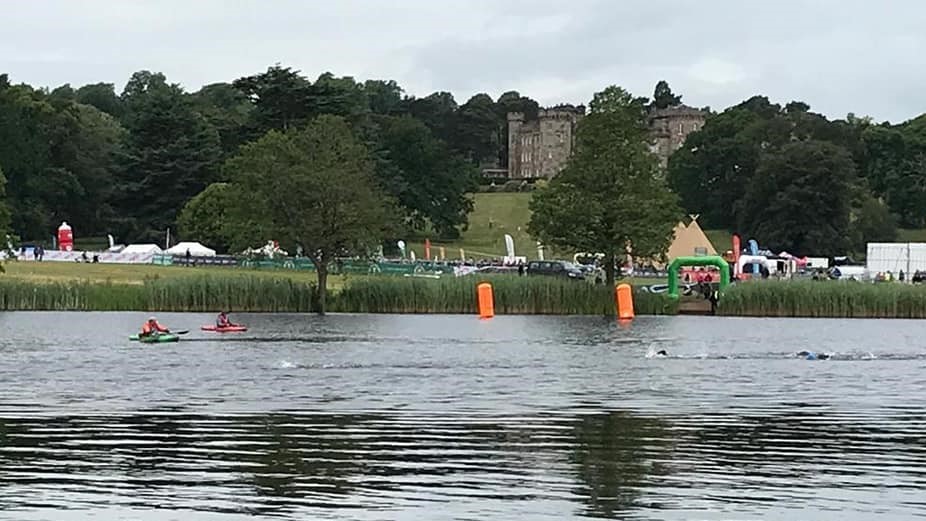 The start was time trial style so no aggravation. The swim was two laps with an Australian exit after the first lap. A very long run it was too!. The water was 19°C, so pretty comfortable in the wetsuit.

T1 was OK but I did forget to take some water into the wetsuit so it didn’t come off smoothly.

Onto the bike course. The downside of a civilised start time is that the roads tend to be a bit busier than if you start at the crack of dawn. The course at Cholmondeley joins an A road after leaving the estate. This road was very busy and made worse by a temporary 4-way traffic light control at the point where we joined it. This had the unfortunate effect of releasing a block of vehicles every few minutes who then got held up by the competitors. For faster riders this meant that there was some coasting and braking where the vehicles were following slower riders. This section was about 5k long,  twice over as it was 2 laps. Inevitably one or two drivers valued their time above the well-being of the competitors. Apart from that the bike course was a good undulating tri bar ride.

The run is pretty tough. Starts on grass, onto large gravel, back onto pretty long grass then finally onto some solid tarmac. Quite undulating and towards the end of the lap a climb through some woods followed by a steep descent, then up a bit and down a hill to start the second lap.

Finished in 2.40 – the bike is 44k and the run was 10.5k so overall pretty pleased. Swim pace was OK at 1.42/100m, according to the Garmin – probably 1.44 taking out the 100m run.  I’ve done 1.40 in the past but didn’t expect to get near that, so reasonable.  Bike power was on target. Not as fast as I would have expected, maybe explained by the creaking crank. Time for a service! Run pace was the same as my Dorney tri last September which given the difficult terrain was a pretty good improvement.

They gave out the prizes a couple of hours after I finished. I won the over 60’s. I do wonder however if they gave the prizes to the correct people. When I looked at the results later on I noticed that most of the competitors in the top 40 didn’t have a lap 1 time for their swim and their total swim time was definitely one lap – lots of 10/11/12 minute 1500m’s. Mine was OK and all the other splits for me were fine. I emailed them and the next day it was “fixed”. Unfortunately all my splits had been changed and were now complete garbage. After another email all was righted again. I was 29th Overall. A good well-run event, although they need to find a new timing partner.